Drumming is a lot more than just picking up two drum sticks and hitting a drum. There are nuances to drumming that the rest of the world knows little about, which lend to the stereotype of a drummer being, well, not entirely vital to the overall epic nature of music.

When you got your first drum, or discovered your love of drumming and rhythm, you probably did just pick up a pair of drum sticks and start hitting a drum. It’s a pretty natural action, no different than picking up a guitar and plucking its strings. However, as with the guitar, once you realized how limiting your novice “hit this drum” technique was, you probably realized that in order to really play like your favorite drummer, there had to be more to these instruments than was meeting your eye.

Or, you had a drummer take the sticks from your hands and place them in a standard drumming grip or hold.

The holds and grips for drum sticks are fairly standard for any drum set drummer, no matter where you are or what kind of music you play. You’ve probably heard of the French grip, the German grip, the American grip (sometimes known as the “I do what I want” grip) and the most common drum stick grips: the matched grip and the traditional grip. All of these grips have one thing in common – your finger or fingers are the fulcrum, creating a “see saw” effect in your hands. This is really important since the “hit this drum” technique will tire you out quickly and/or encourage problems in your hands, wrists, arms and overall understanding of the universe. 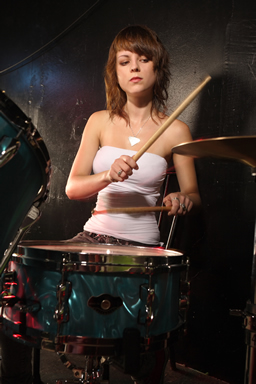 The traditional grip is often associated with jazz drummers and/or is recommended for anyone who has a less dominant hand or wrist when drumming. There are plenty of reasons why we use the traditional grip, but, it isn’t the most common. Its name comes from back when soldiers used to strap a snare drum to their bodies and walk around the battlefields. They needed to be able to walk, drum and hold the drum in place, much like today’s marching band drummers, so the less-dominant arm was placed at more of an angle (think “hand at 8 o’clock”), with the palm facing up, to help encourage mobility over power. The dominant hand holds the drum stick in almost the opposite manner, and closer to the body (4-5 o’clock) with the palm down. There is a sensitivity in the traditional grip that is embraced today, still, especially as it adds to the groove of jazz and big band drumming.

Matched grip is perhaps the most common drum stick hold seen today, especially for rock drummers. Simply put, each hand mirrors the other hand: palms down, index fingers as the respective fulcrums, arms/wrists placed at a comfortable angle from the body. This grip is known for its power and control, and actually describes the German, French and American grip styles. Although, with the French grip, the palms may turn upward instead of down, because of anatomical reasons you’ll just have to play with to understand. The point is that a matched grip has both hands holding the drum sticks in a “matched” manner.

There are plenty of tutorials and discussions online about the different grips and what they are best for. Just like drummers, there are also plenty of variations that can be discovered, once you get into your own groove. Picking up a drum stick is just the beginning of learning how to drum, and, unless you’re a hand drummer, one of the most important first steps you’ll take into greatness. Once you master the grip and get into the spirit of drumming, your own “I do what I want” grip or drumming style will fall into place.