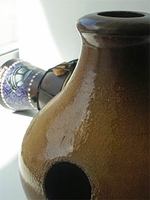 The Udu drum is a perfect example of an instrument that evolved from such humble beginnings. The Igbo women of Nigeria used clay pots to store their food and carry water.  Women were responsible for both the gathering of supplies and the actual creation of the Udu vessel. Because they could only be created by women, the Udu was connected to ideas creation and the feminine divine. These pots were so important that they were given as gifts to the goddesses through large ceremonies. As the ceremonies progressed the Udu began to be played to create music. It was their use in these ceremonies that established the Udu used as a percussion instrument.

This pot-shaped instrument can now be found all over Africa.  The Udu is a complex percussion instrument that can produce different tones at different volumes depending on how it is played. The Udu is played by holding the instrument in your lap with the neck slightly tilted. Your fingers should be spread wide as you strike the Udu with the palm of your hand. Different sounds are coaxed out of the instrument by either cupping the hand over the hole on its side or tapping the fingers near the hole while playing. A musician may also brush their hands against the sides of the Udu to create a raspy sound. When played correctly, the Udu is capable of producing sounds in the one octave range. This makes the Udu a very unique percussion instrument.

Adding diverse instruments can heighten any musical performance. The Udu has a rich history in African music and religious ceremonies that can be a great addition to any drum circle.  Discovering new instruments, such as the Udu, can be a way to explore the self while diving into traditions of the past.

Udu players, how did you get your start with these unusual drums? Let us know in the comments below!