Xavier Rudd is an Australian singer-song writer, voted the world's sexiest vegetarian celebrity in 2007 by PETA. The didgeridoo-playing musician is known for working with voice and several exotic instruments. His following is best in Australia and Canada, where he often plays live festivals. 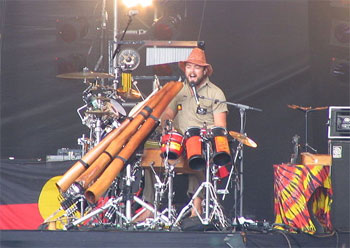 Rudd frequently features a social message in his music, like Aboriginal rights and green living. In keeping with this theme, Rudd also uses Australian and Canadian indigenous people as back-up vocalists and musicians.

Rudd had great interest in the didgeridoo from a young age, practicing on vacuum cleaner hoses before playing in his first band, Xavier and the Hum. Rudd has been recording music since 2002, with his debut studio album, To Let, which he produced himself. Chris Thompson recorded and mixed the CD.

Xavier Rudd later released Solace in 2004, which hit the charts in Australia, premiering in the top twenty. ARIA classifies Solace as a platinum album, and was released the next year in America under Universal Records. Rudd created an American following by touring the United States, promoting the album.

In 2007, Rudd released Food in the Belly in America, the gold album that earned the player his second ARIA Music Award nomination. In the same year, Xavier Rudd opened for Dave Matthews Band on their North American summer tour and toured with Canadian artist Jeremy Fisher, and released White Moth on the ANTI- label.

His last album release occurred in August 2008, with his fifth studio album, Darker Shades of Blue. While the album is his darkest, Rudd believes that the CD embodied all that he had worked for over the last six years. Tarun Tikoo's Surfer Dude's score was written and composed by Rudd.

Xavier Rudd stands out most for his live performances, rather than his studio performances. In 2007, he performed at Bonnaroo, High Serra, West Coast Blues and the Sydney's MySpace Rock for Darfur show. 2008 found Xavier Rudd on a North American tour ending in Vancouver, Canada, where the majority of Rudd's North American fans live. The same year, Rudd played at both the West Coast Blues & Roots Festival and the East Coast Blues & Roots Festival in Australia. He ended 2008 with a brief European tour. Rudd toured the world after the 2008 release of Dark Shades of Blue. Beginning in Australia, the tour covered Europe, Japan and the United States at the Austin City Limits Music Festival.

Because he was born and raised in Australia, the Aboriginals taught him to play the didgeridoo. Rudd's prowess with the didgeridoo actually earned him adoption into an Arnhem Land family, which is an incredible honor. Rudd boasts a group of incredibly talented back-up musicians during his live performances, where he plays a great number of instruments himself - the djembe, the Weissenborn guitar, a few acoustic guitars, his own feet, and of course, the didgeridoo. The singer-songwriter distances himself from other musicians in the genre by playing an incredible number of exotic instruments.