One of the most popular therapeutic programs in practice today is the usage of music. This treatment, dramatized in the Oscar-nominated film Awakenings starring Robert De Niro and Robin Williams, is used successfully on patients with any number of conditions, from those in comas to those with autism. Music therapy has been used in classrooms for ages to keep kids concentrated and minds at attention. Yet researchers are applying the same concepts to dozens of conditions today, in pursuit of a low-priced, high-benefit mode of treatment. 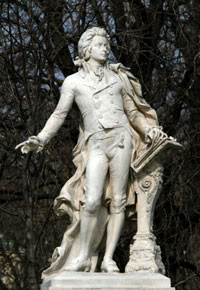 The Mozart Effect refers to the theory that classical music affects mental development.

Dr. Alfred A. Tomatis outlined the Mozart effect in 1991. In his book, Pourquoi Mozart? Tomatis claimed that listening to music is an effective form of therapy for neurological conditions, because music "retrains" the listener's ear, and that variations of musical frequency encourages development of the brain while promoting regeneration of cells.

Classrooms use music as motivation and reward. Why not use the same ideas in therapy? Researchers are finding that by using music that patients engage in, music therapy is an efficient stimulator, regardless of the mental condition of the patient. In fact, therapists use music therapy to reduce negative actions in disabled patients by providing socially acceptable impulse outlets.

For example, music therapy is becoming increasingly popular in the treatment of stroke victims. People who have suffered stroke often lose their speech, making communication almost impossible. Listening to music helps to stimulate blood flow to the brain, and stimulates a cross over effect between regions. This cross over effect causes brain cell regeneration, helping to restore normal brain function. Music therapy can be hugely instrumental in regaining speech as a result.

In regards to the traditional understanding of the Mozart effect, as a way of improving IQ and aiding in mental development, aspects of health can still apply. Music is processed in both left and right hemispheres of the brain, meaning that the artistic side, responsible for speech and language is not the only side to benefit.

The rhythm of Mozart, classical music or any other genre can be used in the development of cognitive functioning. Particularly in patients with autism, music therapy helps to organize the sensory system of the patient by providing an association with the rhythm. This helps in the processing of sound, and the development of motor skills. Music therapy also eases patients into other forms of therapy, as it provides a feeling of familiarity in the therapeutic setting. This can encourage more traditional forms of therapy, as it comes with a sense of comfort.