The flamenco is a time honored musical and dance genre that originated in Spain. Flamenco developed in Andalusia due to the interaction between Arabic, Andalusian, Sephardic and Gypsy cultures in the area in the 19th century, although forms of the music and dance were noted earlier. Flamenco music is characterized by intricate guitar playing and flamenco dancing refers to the corresponding dance, performed with easy to hear footwork. 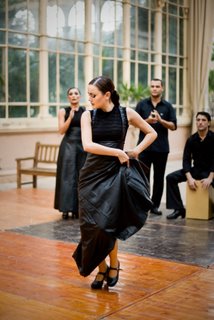 The cajon drum used for Rumba, a modern form of Flamenco.

Flamenco emerged from a complicated cross section of musical and cultural norms in the area. The dance was originally performed only by the gypsies in their communities, but musical members of the surrounding areas eventually joined in, adding their own flavor.

Flamenco music changed greatly in the late eighteenth century, when musicians changed instruments. Though flamenco was originally played on a classical five string guitar, flamenco enthusiasts adopted the six string guitar, which is now one of the most characteristic aspects of the genre. The added string allowed further diversification among players and styles. Most traditional flamenco guitars are made of Spanish spruce or cypress, and are smaller than normal guitars. This provides for a sharper sound while playing.

About a century after the addition of the sixth string to the guitar, flamenco music reached what is known as "the golden age." Cafes cantantes became popular between 1870 and 1910, allowing flamenco artists to hold ticketed concerts. This also paved the way for the popularization of flamenco dancing who performed at these concerts.

Professional singers and dancers, like Silverio Franconetti, Enrique el Mellizo and El Loco Mateo, began to build their reputations during this era, and their music is still often played in modern music.

The years after the Golden Age of flamenco are often known as the Etapa Teatreal, or the theatrical period. Flamenco music become commercial and was considered decadent. Flamenco music was played in larger arenas, which caused incredible popularity, but decreased the artistic integrity of the musicians.

The flamenco is an incredibly emotional dance. There are few choreographed dances, as the performers are meant to feel the rhythm, in a manner similar to jazz. Dancers also use their feet as percussive instruments, creating the rhythm. Flamenco musicians also improvise while playing, rather than pay attention to the beat of the rhythm.

In today’s version of the flamenco, artists are heavily influenced by other cultures. Many flamenco songs are derived from Arabic music from Yemen. Modern forms of the flamenco borrow greatly from Latin American and Cuban musical forms. This is called the rumba, and cajons are often played during performances of the genre. A cajon is a percussive instrument used to mark the beat. This hand drum acts as a stool for the player, who sits on top while slapping the frontplate of the cajon. The drum is equipped with guitar strings or snare strings that rest against the frontplate, giving the acoustic drum a range of sounds. The cajon is often used to define the compas, or the rhythm of the music and the division of the musical accentuations.