The heart and tradition of African music is the drum. The original purpose of the drum for the people of Africa for communication between tribes. The type of drum used and rhythm played sent specific messages between neighbors. 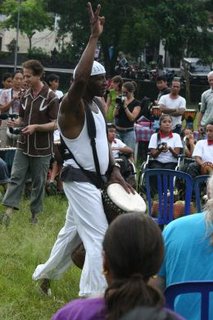 Three African drums with beautifully rich history are the sabar, kpanlogo and the most widely used today -- the djembe. Each one of these drums has its own song and story in African history.

The most popular of the African rhythms are played upon the djembe, a hand drum that was created by the Numu peoples of West Africa, has become relatively popular in Western music. Such notable musicians as Paul Simon, Peter Gabriel, and Ben Harper have all used the djembe's unique sound in their body of work, and it is featured in the unique performances of Cirque du Soleil. The djembe is a communicative drum, used to bring people together. This drum creates music from the bass notes created from hitting the center of the drum head, and tone notes from hitting the edges of the drumhead. The drum is thought to contain three - these are the spirits of the drum's creation. Spiritually, it was believed that the drum had one from the wood or the tree, one from the hide of the animal, and one from the man who created the drum.

Many other popular types originate from the kpanlogo drum, created in the Greater Accra Region in Ghana, Africa. This drum brought forth kpanlogo music, and is used often for dances. When the kpanlogo is played, it is usually a time for celebration. Because of this use it quickly became known as a ceremonial drum. Dancers are led by the kpanlogo lead drummer's beat. kpanlogos are usually played in groups, with rhythms created by more than one player. However, it is usually accompanied by a djembe or some other drum to produce the core beat. 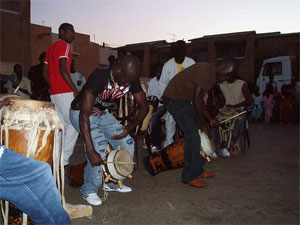 The sabar is one other type of drum, this one originating in the West African nation of Senegal. However, this drum is played in a contrasting manner to the others, as it requires the use of a hand and a stick. The sabar was used for communication between tribes, as the sound could travel great distances. The meanings of the rhythms included cries for help or warnings. The kpanlogo has much the same function. The sabar is used for such occasions as births, weddings, and various holidays. Sabar drum beats today are kept alive through the work of the Senegalese musician Doudou N'Diaye Rose, a man born in Dakar, the capital of Senegal. Doudou N'Diaye Rose alone has created over 500 drum beats on the sabar, his instrument of choice.