“Kalimba” and “mbira” are often used interchangeably to describe a kalimba or an mbira. It can be pretty confusing when learning about either of these African instruments and even more confusing when you’re trying to buy one. To ensure you have the best experience when shopping for your new kalimba at X8 Drums, we thought we’d talk a bit about why a kalimba is not an mbira.

The kalimba looks pretty similar to an mbira, and both instruments consist of a wooden soundboard with steel keys that players depress and release with their fingers to create a tranquil, bell-like sound. Despite these similarities, the kalimba and the mbira are not the same instrument. Even a kalimba tuned mbira is not the same as a kalimba, just in tune with it. The kalimba is actually a smaller, modern version of the mbira, which dates back more than 1,000 years in Zimbabwe. The kalimba was created by Hugh Tracey in the 1960s. Tracey liked the sound of the mbiras he heard while living in what is now Zimbabwe but wanted to create an adaptation better suited for Western music.

While there are a few subtle differences between the kalimba and the mbira, including a double row of keys on the mbira and a single row of keys on the kalimba, the major difference between the two instruments is in their scales. The kalimba features the seven-note diatonic scale used in traditional Western music while the non-western scale of the mbira features the same notes but not in the same order. Some notes may even be missing. Because of the kalimba’s diatonic scale, every two-note combination creates a diatonic interval, making it easy to create harmonies.

The kalimba also features a different percussive element. In place of the mbira’s buzzers, the traditional kalimba features two holes at the bottom of the sound board. If you wave your fingers in and out of the holes, you’ll get a “wa-wa” effect. However, like kalimbas used by many musicians in Africa, the kalimbas at X8 Drums feature buzzers to create the distinctive buzzing effect of the mbira. 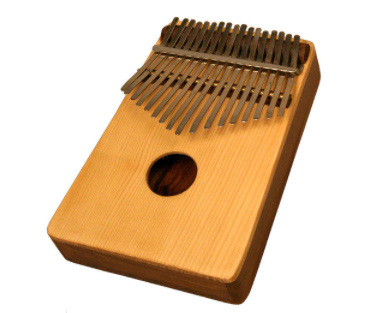 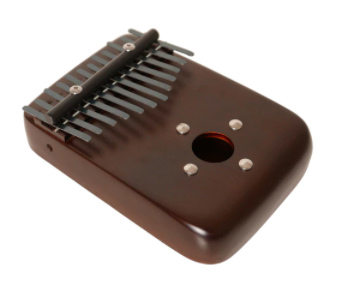