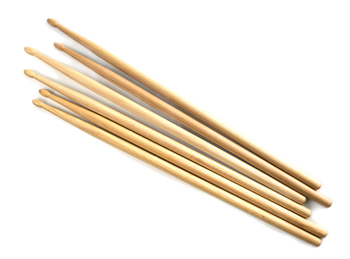 Drum sticks come in many different shapes and sizes, woods and weights, with little numbers on them, maybe a logo or a special grip or tip. More often than not, a drummer chooses their drum sticks on what feels right, which isn’t a bad way to go about it. But, let’s say you have an aunt who wants to get you some sticks, or, you just like to impress others with your drum stick knowledge. That’s what we’re here for… all the details of drum sticks you didn’t even know you (or your aunt) wanted to know.

Looking at a drum stick, you’ll see a few common traits: they’re stick-shaped, they have a letter and a number and there’s an obvious tip versus the “butt” of the stick. Those letters and numbers are pretty significant; as they give you an idea of what kind of stick you’re holding, and what it is typically used for in drumming.

A few other details about your drum stick choices include the tips of the sticks, the length and the wood used in their manufacturing. Keep in mind, just like no two drum sticks are exactly alike, no two manufacturers create their sticks in the same way (Zildjian makes “D” sticks that are outside of the mold, for example)… this is where the whole feel of the sticks comes back into play, and where “brand loyalty” becomes a debatable topic for drummers. 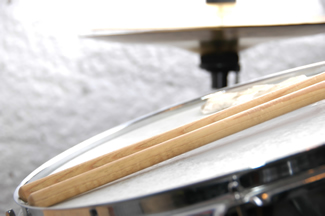 Drum Stick Tips: The tips of drum sticks have different shapes, and some have various coatings, as well. Each of these nuances affects the tone and volume of the rhythm.

Drum Stick Length: As drum sticks are a great example of a “simple machine” lever with a fulcrum, the length of the stick can definitely change what you hear as you drum, and how you’re drumming. Longer sticks give you further reach, but can also be more delicate in durability. Shorter sticks have a softer tone and more rebound.

Drum Stick Taper: The area where the shaft of the drum stick narrows to the tip is the taper. A short taper or neck increases the weight of the stick for more volume and durability, wheras a long taper does the opposite.

The wood used in drum sticks has different effects on the sound and style of a beat. You’ll find drum sticks made from hickory (the most common), maple, and oak, as well as less-common, exotic wood. As a general rule, maple is the lightest, followed by hickory and then oak, with the volume/durability factors following the same pattern of light (maple), medium (hickory) and hard (oak). The harder the wood, the more durable and loud.

Picking drum sticks isn’t as easy as you’d think, and it can take time to discover your absolute favorite, go-to stick for your drum set. Then, of course, you’re going to change your mind and want to expand your sound with a bunch of different sticks… because that’s what a drummer does. At least you know, much like those snowflakes, each pair of drum sticks makes you just a little more unique and adds another tasty layer of awesome to the world of drums, percussion and music as we know it.