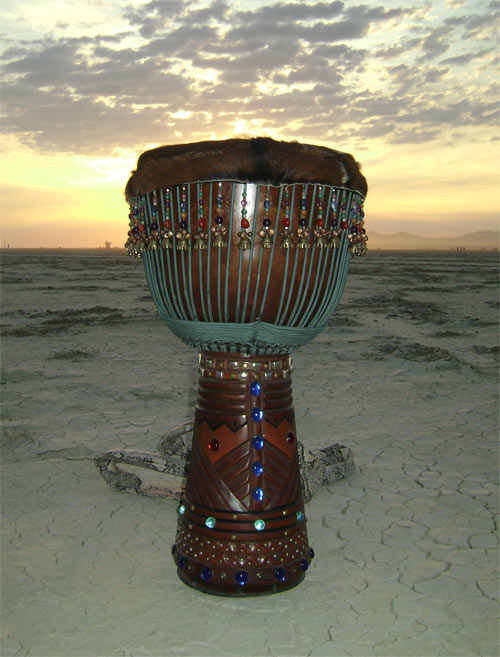 Music and spirituality are both important aspects of cultures around the world. Through music, legends, mythology and tales of the history and events of a people are told. Spiritual ties are defined through the music, connecting families, tribe and clans together, and to the lands on which they have lived. Many cultures attribute much of the development of cultural mysticism to the instruments created to make those songs. The djembe, for instance, has its own spiritual essence that is still reflected in today’s recordings, performances and drumming events.

Djembe drums date back to the 13th century Mali Empire, when they were used during ceremonies, festivals and to communicate over the long distances between neighboring tribes in West Africa. Djembe drums traveled with these tribes, specifically the Mandika and Susu tribes, and the Numu, or blacksmiths of those tribes. Legends of the Djembe may vary across tribes; some believe the invention of the Djembe was due to a broken mortar covered by a goatskin, while others believe the Djembe was a gift from Djinn, the original Genie, sometimes considered to be a malevolent spirit. However, no matter how the Djembe originated, it became a very important part of the spiritual practices of the people of West Africa. Many consider the drum itself to contain three spirits: that of the animal used to make the drum head, the spirit of the drum maker and that of the tree used for its shell. Others also believe that the drummer who plays the Djembe is a spiritual part of the drum, too.

With its goblet shape that universally symbolizes love, life, spirituality and emotion, the Djembe was a natural addition to the festivities and celebrations within West African tribes. These drums were played during harvests, weddings, and births and to mark the passing of the seasons or cycles of the moon. Djembes were also tools used by healers within the tribes, helping to calm those in pain or distress, much like today’s use of drumming in modern, yet alternative healing methods. The ability of the Djembe to relieve pain and treat illnesses gave even more spiritual credibility to the instrument, and even today, it is seen as an instrument of the divine.

Today’s use of the Djembe reflects its roots in the spirituality of cultures through drum circles and drumming events. Drumming brings people together on a different level than many other activities, as it reaches into parts of the mind that are said to be unexplainable. In healing circles, the same type of rhythmic therapy is being used to treat pain, anxiety and a wide range of physical, mental and emotional disorders. Djembe drums are one of the most important examples of how these beliefs can transcend both time and cultures, continuing to give back to the world, in the form of music.