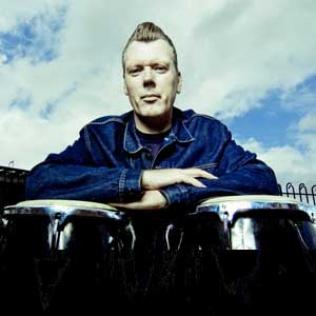 Snowboy shows how embracing your own musical talent can lead to success. You don't have to be the fastest or most technically skilled drummer to make a mark. It is more about understanding your groove and creating music that is unique to that.

Latin American roots are not a requirement for becoming a Latin Jazz star. And Mark Cotgrove, better known as Snowboy, is proof. This DJ turned drummer made way for Latin Jazz in the United Kingdom and has become one of the UK's top percussionists. Snowboy brings a fresh perspective to Jazz music that would rival his American counterparts and makes him a shining star in the London Jazz scene.

Snowboy began as a DJ during the London Jazz Dance craze of the 70s and 80s. But he was drawn to the smooth rhythms of Latin Jazz and began talking lessons for the congas. Snowboy will admit to not being the fastest drummer; instead, he prefers the slower grooves of the greats like Ray Barretto and Poncho Sanchez.

Years later, Snowboy has produced seven albums with his band, The Latin Section. On his most recent, Mambo Rage, Snowboy looked to reignite the world of Latin Jazz which he felt had become too mundane. Latin Jazz is supposed to be exciting and energetic; he hopes the new injection of passion will jump start the music scene.

Today, Snowboy spends his time touring with performers like Lisa Stansfield, the James Taylor Quartet, and pop star Basia. He also brings together famous artists like Airto and Mongo Santamaria to perform with. As the music of the United Kingdom has evolved, Snowboy has evolved along the way keeping him on the cutting edge of music. He has seen the transition from Jazz Funk and Jazz Fusion to the more modern Acid Jazz.

Regardless of how much music will change over time, you can be certain that this drummer will remain true and stay on the creative edge of imagination.