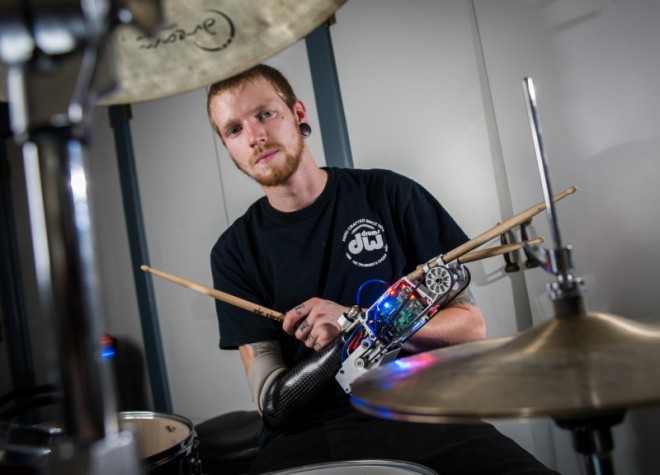 Drummer Jason Barnes lost his right hand in a work accident in 2012. Not one to give up on his passion for music and drumming (and bored out of his mind without drumming in his life), Barnes taped a drum stick to his arm a few weeks after leaving the hospital to see if he could play. The makeshift drumming hand was far from perfect, but it helped him realize he could still play.

After tinkering with a few more makeshift drumming hands that allowed him to play well enough to get into the Atlanta Institute of Music and Media, Barnes crossed paths with Gil Weinberg, a music professor and musical robot inventor who helped Barnes build a drumming prosthesis.

The GATech robotic drumming prosthesis features two drum sticks. Barnes controls the first stick by using his bicep muscle. The prosthesis uses electromyography to pick up the electrical activity of the bicep. The second, motor-controlled, self-playing drumstick senses the rhythm Barnes is playing and creates a complementary beat. That second stick also allows him to play a lot faster than most drummers.

While the prosthesis was designed for drumming, Barnes told ABC2 News that it could be used for more than just making music. He said that the prosthesis could potentially act as a third arm for surgeons or to hand tools to astronauts working on a space shuttle or station. At the time, Barnes was still just testing it out for drumming in preparation for his first live show using the prosthesis.