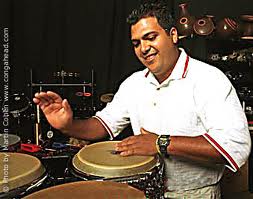 It takes passion to keep with something in the face of tremendous obstacles, and it takes class to keep going with style. That sums up Roberto Quintero in a nutshell. Quintero comes from a family of musicians; he doesn't sit idly on their coat tails to reach success as a Drummer. Roberto has pushed his way up through the music industry on his own merits working through adversity along the way. Bringing authentic Venezuelan beats, he represents the next generation of talented hand drummers who will tap out the new rhythms for years to come.

Quintero first learned about music from his father who was a performer with the group Madera from Venezuela. By age seven, he was a young musical prodigy. But his musical career seemed to have been cut short. His father died when a boat he was travelling on sank. Roberto was devastated. Music was directly connected to his family; he was with his father everywhere and now he was gone.

To cope with his loss, he stepped away from music and got into Karate. He excelled at the martial art reaching Black Belt by 16. This helped resuscitate Quintero's love of music, he would eventually attend the Conservatory of Music and by the end he was performing professionally. This led to a tour with singer, Oscar De Leon.

Soon Quintero decided to move to the United States and New York. He started out as a street performer making three to five dollars a day. Ultimately, he was able to get the attention of the likes of Celia Cruz and Marc Anthony.

A Latin drummer at heart, he loves Jazz and finds inspiration from artist like Tony Williams, Elvin Jones, and Jack DeJohnette. Roberto Quintero is growing into the leader of the next generation of professional drummers. He has helped formed his own band, Timbalaye. He is also developing his own solo album. While touring and performing keeps him busy, he takes time to go home to his family.