USE CODE BLACKFRIDAY FOR 10% OFF ANY ORDER OVER $99. PLUS FREE SHIPPING!

Peter Marino is the One Hour Drummer! 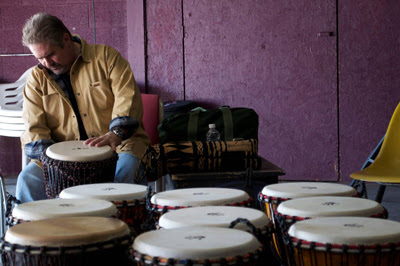 Degrees in Music and Music Education are the foundation for Peter's development of the "Kyo Method", a rhythmic protocol that has participants playing percussion in as many as 5 parts in as little as an hour. This simple and enjoyable learning method supports players at all skill levels and makes it possible for students to easily recall and play advanced rhythms that would normally take hours of practice to learn.

Peter has developed a national following with his engaging teaching style and successful programming. As a professional musician he has played on Broadway for "The Lion King" and worked with music greats such as Yo Yo Ma, Giovanni Hidalgo, Andre Watts to name a few. He has also produced and directed numerous concert series covering the jazz, classical and international music genres across the country. Peter plays trumpet professionally and is a published author.

Peter's actively shares the secret that all musicians know "as enjoyable as it is to listen to music it's even more fun to play".

Check out all that One Hour Drummer is doing and read the latest ideas.