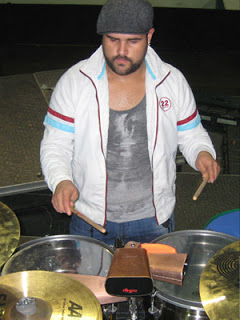 In a world of sampling and synthesizers, there are some that might ask the question: do we still need percussionists? These people haven’t met Manuel Corao. Corao, best known by his stage name Papayo, is rapper Pitbull’s resident percussionist. Pitbull’s band has a full time drummer allowing Papayo the freedom to really explore what the other members of the percussion family can offer this hip-hop crew. But to call him a hip-hop performer would not do justice to this drummer. Papayo is at home with reggae and has played gigs for Latin Jazz and Salsa groups as well. This well-rounded musician also plays the piano and sings, he even writes and produces. But it is behind the drums where Papayo first learned to express himself and express himself he does!

Young Corao moved with his family to Miami to avoid political turmoil in their native Venezuela. From an early age, he loved performing and quickly began to grow more confident in his abilities as a percussionist. While his parents named him Manuel at birth, his felt his head looked like papaya and so they began calling him ‘Papayo’. The name stuck, and that was the beginning of a tremendous stage presence that persists to this day.

After high school, Papayo began studying music at Miami Dade College and the Alex Berti Music School. This is where Corao learned the piano and studied music theory and composition. But his destiny awaited. Not quite finished with school, Papayo saw opportunity knocking and took to the road with his first band called Don Pepe. Papayo’s natural abilities with drums fit in perfectly with Don Pepe’s fusion of reggae, Latin Jazz, and ska. Even from the beginning, he was melding genres together into a unique experience.

After his stint with Don Pepe, Papayo moved on to other groups like Suenalo, Elastic Bond, and Concrete Rebels before landing a spot in Pitbull’s band. Playing with Pitbull is a unique experience for Corao. While the group has the Latin feel he group up with, they are also a hip-hop performers. This mixture brought Papayo together with other drummers that had different styles and sounds. Currently he works closely with Pitbull's drummer, Omar Tavarez. Papayo appreciates the collaboration; he understands there are different types of percussionists and greatly admires all of them. This respectful relationship allows him to integrate with Tavarez to create a cohesive rhythm section that is indistinguishable from the two parts.

Nowadays, he leaves the drumset to his partner, but Papayo’s rig has its own array of diverse instruments to keep Papayo busy during performances. His setup includes a set of three congas, bongos, djembe, a pair of timbales, timbale snare, and floor tom as well as an assortment of cymbals, a synthesizer, woodblock, chimes, and of course a cowbell. Got to have more cowbell!!

Together with Papayo’s natural skill, these instruments create an extraordinary sound that makes his performances unforgettable.