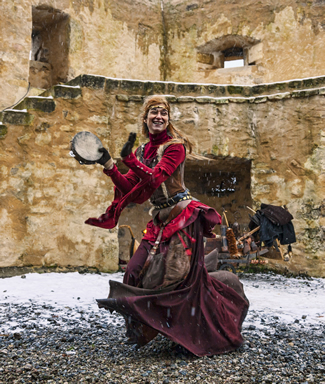 On any given spring day, you can hear the soft jingle of a local band of tambourine players as they glide through the meadows, ribbons trailing behind them, punctuating each step with joyful sounds.

Well, ok, that doesn’t really happen so much anymore, but, it is a great visual for anyone who sees the tambourine as more than just an accent percussion instrument, but, a true instrument in its own right. Tambourines have been around since ancient times, where they were mostly seen in the hands of girls and women in village celebrations, ceremonies and festivities. From that image to the more modern concept of a tambourine being played on stage by vocalists, tambourines have not only come a very long way, but, they remain an important staple of our music today.

That’s a pretty easy question to answer, just take a look at this page of tambourines for sale . 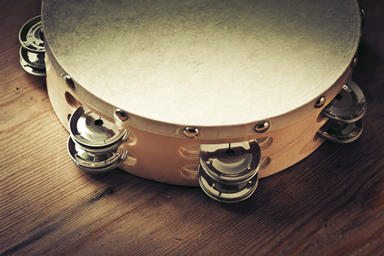 It is the shape of a tambourine that may have a pretty interesting evolutionary history, however. As drummers, percussionists and musicians, we all look for a new sound or a better sound to fit into what we’re playing, explaining where the different materials and jingles of a tambourine have been derived. But, what about the shapes we see today? What’s up with the star, the fish and the crescent?

Well, we’re pretty sure that the star-shapes, fish and other funky renditions of the tambourine are simply to please the aesthetic demands of the musicians out there. Plus, kids like them. We like them, too… not to mention our funky tambourine with lights.

The crescent tambourine, however, is another story. Legend has it, that the RhythmTech company is responsible for that very important evolution in percussion history. The founder of RhythmTech allegedly could not hold and play his circular tambourine for a decent length of time, and determined that improvements needed to be made before his hand fell off from playing the instrument. The crescent shape actually puts the center of gravity in a better place for playing, and provides a much more balanced feel. Thus, the crescent tambourine was born, and we’ve been diggin’ them ever since.

For music and percussion nerds, there is a pretty great feeling when you realize that little tambourine you tap against your thigh is the same instrument that was used in Biblical times, and even earlier. In the world of music, there is probably not one instrument that is spotted or heard as much as a tambourine. When an instrument stands such a long test of time with very few improvements, the power you wield in your hand is one of ancient callings with just a touch of modern Screamo wailing.