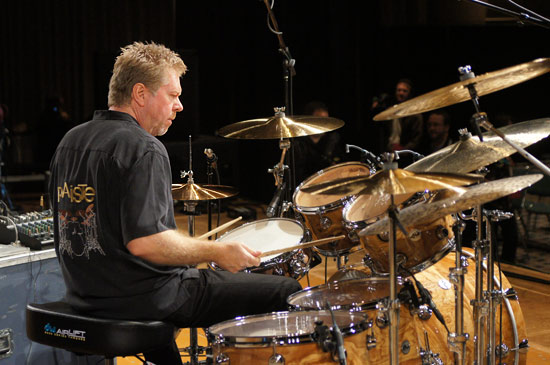 You probably know John JR Robinson as one the most recorded drummers in history. But how did he get there? Playing drums since the age of 8 and in bands since the age of 10 and honing his skills in high school and at the Berklee School of Music, Robinson started his drumming career with a bang in 1978 playing for Chicago-based American funk band Rufus. Not a bad start, eh?

While playing with the band, Robinson’s distinct concept of time, feel, groove, and style caught the attention of Quincy Jones, who asked him if he played sessions outside of Rufus. Upon answering, “yes,” Robinson recorded the drums of Michael Jackson’s “Off The Wall.” After that session, Robinson decided to start a successful career path by saying “yes” to any gig and launched a 15-year studio plan, which extended far past 15 years. In fact, Robinson continues to record and gets so many recording gigs that he has to say “no” sometimes.

His plan not only gave him a successful career as a recording drummer but gave him the opportunity to record for some of the biggest names in music, including Lionel Richie, The Pointer Sisters, David Lee Roth, Steve Winwood, and Natalie Cole. Robinson has also been the drummer for Quincy Jones since 1979 and Barbra Streisand since 1993. He also teaches a course in “Studio Techniques” at the Los Angeles Music Academy and records solo music. To hear Robinson play, head over to www.drummerworld.com.

Every drummer looking to build a successful career for him or herself should take notes from Robinson. Instead of waiting for that big gig, start saying “yes” to every opportunity and you might just work your way to the big time like Robinson did. And if not, we know you’ll at least have fun rocking out and doing what you love.