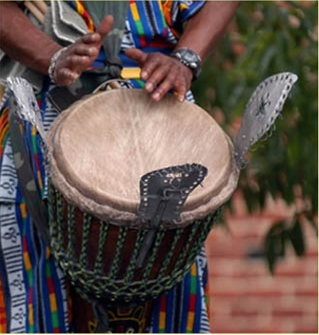 Not that we would ever encourage “drum envy,” but, have you ever noticed that some djembe drums have a little more going on than the rest? We’re not talking the hand-carved djembes (although, those are pretty great) or the djembes that come directly from Mali, Senegal or Ivory Coast.We mean the djembe drums that include a bit more style and flair than the rest… the djembes that seem to know they’re the boss of all drums, the warrior-styled djembe drums that take no prisoners.

Ksink ksink is known by a few names, including sink tsink, ksing ksing, segeh-segeh, kissing, kashink-kashink, or nyang-nyama. It is also known as djembe shaker, because that’s pretty much what it is: a set of shakers for your djembe. These aren’t just ordinary shakers, however. In fact, there aren’t a lot of flat, metal shakers that use metal rings as a hybrid-shaker-tambourine sound, especially those that can be snugly tucked into the ropes of a djembe.

Ksink ksink aren’t just for decoration, although they can really change the appearance of a djembe. They’re also not just about the sound of the metal. Ksink ksinks are actually representations of the shields that warriors would use in battle, and the protection those shield provided. Since drumming was an effective method of communication during battles, it stands to reason that the drummers who relayed messages needed to be protected. Plus, the metal ksink ksink were thought to direct the rays of the sun onto the head of the drum, helping to brighten its tone. Some also thought they were a great way to hide the drummer’s hands from the prying eyes of the uninitiated, keeping the secrets of rhythm within the ranks of the Mandinka blacksmiths who were first thought to play the djembe.

Most of the time, you see ksink ksink in sets of three per each djembe, although there is room for more in many cases. There is a great resonance in the sound when the ksink ksink are used, and they are a stunning visual for any djembe drum.

If you’re not into ksink ksink, you can always try your hand at the ropes on your djembe. Changing the ropes on a djembe can give you the ability to experiment with the look your drum, as well as the sound. Djembe ropes come in many different colors, and while you’re working on the Mali weave, you can add other objects like beads or feathers, or whatever helps get your drum to represent your personal style. And, since you’re already changing the ropes, you may want to go ahead and look at a different type of skin for the drum head.

Of course, you may just want to keep your djembe as true to its original self as possible. That’s what djembe bags and straps are for – you can express your own drum fashion needs without changing a thing about your djembe.

There are a lot of great ways to dress up a djembe drum, and there is no reason to not experiment with the different variants of sound and style possible. A djembe drum is a reason to celebrate, and it might as well look like it’s dressed up for the party (or drum circle), in whatever manner you choose.