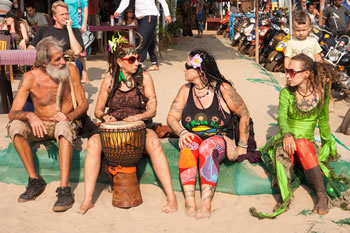 The phrase, “drumming up support,” is reflected in anything from PTA fundraisers to the drum circles that we saw during the Occupy Wall Street demonstrations, and for very good reason. These circles of musicians, dancers, singers and performers have a long history of working to get the attention of others for a good cause by joining people together with one purpose, and “creating a joyful noise” in the hopes of creating lasting change.

The history of drum circles and drumming isn’t entirely clear, as drumming had a variety of roles throughout civilization. Drums were often used on battle fields during war, or were part of celebrations in villages. Drums were used to communicate over long distances, as well, with thunderous rhythms announcing arrivals of tribes in unknown lands as a security measure for both the residents and the visitors. As with most modern drumming traditions in the U.S., however, the connection between drum circles and protest movements can be traced back to the dark era of slavery, in which countless Africans were “traded” across the ocean, leaving behind their homes, customs and traditions.

As drumming was a means of communication in Africa, it became a bonding force for Africans who found themselves in the Americas under the rule of slave owners. There were language barriers these men and women had to overcome, and music and rhythm was thought to be an evil, or uniting force by those “in power,” including the drums that were shared. The slave owners, fearing an uprising from these men and women, would essentially ban any native drums from the possession of the Africans, further degrading any resemblance to the lives they once knew. However, even without the traditional djembe drum, for example, drums were soon fashioned out of other objects that could easily be “hidden” if the need arose. The box-shaped cajon drum, for example, was originally created out of shipping crates or drawers, helping it blend in with its surroundings and eliminating any punishments for owning or using a prohibited “drum.” Steel drums have a similar history, as well .

Because the drums and drumming became such a uniting energy for slaves in the Americas, a cultural union of protest was seen through the songs and rhythms developed that were based upon the songs and rhythms of Africa. These practices continued to evolve throughout the years, where music and rhythm were considered motivating forces that conveyed messages through innuendo and hidden meaning, as well as through the use of common objects as musical instruments. Through this hidden communication, more people were able to find common ground against oppression as well as solace and solidarity in numbers. 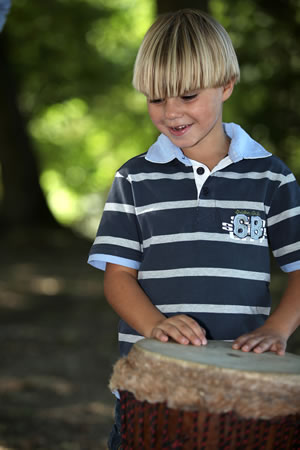 Today, we see the same sort of connection between rhythm, uniting people and protesting the wrongs of the world. Drum circles and drumming are a part of the musical and community landscapes we all enjoy, but, they still serve a common purpose. Through rhythm, not only has it been proven that endorphins are released, creating a physiological bond between drummers and percussionists. That same rhythm, when focused on a cause, is a reminder that the squeaky wheel gets the oil, so to speak. Drummers, as a group, are formidable. The rhythm gets attention, and it shows that even the smallest act of drumming can create a presence that is unlike any other out there. The attention a drum circle receives, especially as a protest, polarizes those who witness it, as was seen in the Occupy Wall Street protests. To many, the drumming was a nuisance. To others, it was the sound of freedom, of a peaceful protest, and of a gathering of individuals all seeking to change circumstances beyond their individual controls.

While there is not a completely parallel comparison between the African slave trade and today’s drumming protestors, there are hints of the same reasoning behind the two situations. The common ground, of course, is the drums that are used, as most drums in drum circles are a tribute to their roots in Africa. There is, of course, much discourse about why a drum set was created and is the “preferred” method of drumming, but, that can be discussed another time.

In terms of the drum as a tool for peaceful protesting, a great point that can be made is that if a person is beating on a drum, his or her hands are not being violent toward anyone or anything else. Drums are the ultimate in peaceful protest: loudly stating a purpose, uniting us all together, and helping to create a positive rhythm for change.