Here at X8 Drums, we recently came across this great article, "When Musical Instruments Become Family" by Felix Contreras.

After finding some beautiful vintage Valje Congas by Tom Flores that were subsequently taken off the market because of "a personal connection to the instruments," Contreras began to wonder about why jazz musicians form such strong attachments to their instruments.

Contreras argues that instruments "become like members of the family." Selling an instrument would be the same as selling a sibling - wouldn't be an option no matter what the monetary value.

Contreras' brother shared similar sentiments towards his guitars. "He still has his 1970 Fender Jazz Bass," says Contreras, and though it might be worth much more now than it was when it was new, he would never consider selling. Contreras continues, "Same with his Gibson 353 guitar," one of his brother's favorite guitars to play on gigs. 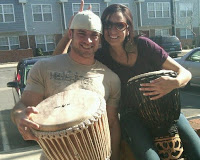 Daniel and Elishia with their X8 Djembes.

What do you think, X8 drummers? Do you think this attachment is exclusive only to jazz musicians or drummers? Do you care as much about your keyboard as much as you do about your djembe, or your guitar? If your house was on fire and you had five minutes to save whatever you could, which of your instruments would make the cut? X8 wants to know!