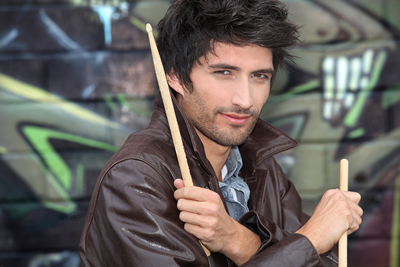 We all have a rhythm, we all have a beat that drives us, inspires us or leads us into a more fun, harmonious or playful state of mind. Feeling “in sync” with our surroundings gives us a more relaxed approach to life, and the ability to get into that groove is a function of rhythm and drumming. Yet, few people look at a drummer and think, “wow, she’s so chill!” It is a lot more common to think of drummers as spazzy, or even (sadly) less intelligent than other instrumentalists because of the old stereotypes and… well, playing drums is a workout.

But, even as our bodies produce the beat and we keep time flowin’, drummers know how much brain power it takes to keep a steady, interesting rhythm. We don’t need science to vindicate our love of rhythm. We just know we rock, and we rock hard, even when tapping our fingers on a desk, waiting for our next change to drum.

Considering the coordination, timing and understanding of music that is required to drum, it is no wonder there’s been such a huge focus on the mind of a drummer, and what rhythm does, in turn, for the mind. Recent articles have established that a personable to play rhythm, or polyrhythms, has a better understanding of how tocreatively solve problems. The process of learning polyrhythms requires understanding the basics of rhythm, seeing the similar patterns in the beats, and then rebuilding and rebranding those basics into something that is seen, felt and heard on a more complex level. This ability to strip aside extraneous stimulus, process it and regenerate it into something new works for not only rhythm and music, but, it can also be the basis for innovation and creativity in any other area of life.

Group innovation and problem solving can also be connected to rhythm. A neuroscientistat Carnegie Mellon University contends that the brain works with rhythm much in the same manner as a group of people work together with rhythm. His study points to the brain having natural rhythms that are stimulated based upon the various tasks a person is doing. Once an area of the brain is stimulated, the actions needed to complete a task (walking, talking, singing in the shower, understanding physics) are provided by cells that begin to work together: just like when a group of people are asked to play a community rhythm in a drum circle. The people sync the rhythm much like the mind syncs its rhythm, in order to complete the job.

And, finally, research has said for years that drummersare smarter than everyone else. Through basic intelligence testing of drummers who are able to hold a steady beat, and analysis of the drummers’ brains, the result was that drummers scored higher on tests and had more “white matter” in the brain that is linked to higher levels of intelligence. Problem solving proficiency was also noted and connected to a person’s ability to play a rhythm in time.

Drummers get the short end of the stick (pun intended) over and over again, yet, the ability to maintain a beat can be difficult for anyone (yet, we’re not saying everyone isn’t intelligent). Drumming involves multiple levels of rhythm and musicality, and, drums have been around much longer than guitars, pianos, brass and woodwind instruments. Maybe it is the simple nature of drumming and rhythm that initially brings the conclusion about lower intelligence and drummers, or, the stereotype of the silent person at the back of the stage. Perhaps drummers are the musical introverts, gaining energy from the internal, and misunderstood by the rest of the extraverted world. Despite the stereotypes, the misinformation about what drumming truly is, and misconceptions of drummers, just check out what a drummer actually is doing while playing your favorite beat. You’ll be surprised at just how smart we really are.