With funding to education being cut nationwide, most schools are focusing on reading and math as a consequence of the Center on Education's policy, No Child Left Behind. Because funding overall is limited, money that had previously supported programs in physical education, the arts, and other areas of study is disappearing in favor of state-tested subjects.

Student on bongos learns the benefits of improving their talents through practice and dedication. 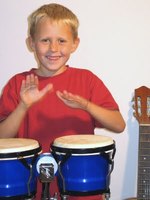 However, schools are making a mistake when they cut funding to their music programs over their math or English programs. As reported by the College Entrance Entrance Examination Board, students who have studied music score at least 40 points higher on each section of the SAT - 44 points above their peers in math, 63 points above in verbal.

These findings are reflected in the average American's views as well, as a Gallup poll by NAMM (the trade association of the international music products industry), show that almost all Americans, 94%, believe that studying music increases intelligence.

NAMM has also shown that music studying can help in other avenues of life as well. Students who have undergone music training are better adjusted, and work well in groups. They also exhibit a higher level of confidence than their less musical schoolmates, and later in life, turn to academia rather than alcohol, cigarette, or drug use.

A study performed in 2003 backs up these views: researchers in Hong Kong analyzed the effect of musical training on ninety students over the course of five years. Half of students were given lessons on traditional instruments and played in the school's orchestra, while the other half took no lessons. After five years, students who played with orchestra showed a greater increase in verbal memory than their nonmusical peers.

In fact, learning to play music has been linked with increased development of brain tissue, which leads to a better sense of proportions and verbal skills. This helps in an increase in intelligence that helps not only the SAT test, but in life as well.

Virgil Griffith, a CalTech grad student, recently charted his peers' taste in music against their average SAT score. During this test, he found that students who listen to music, like Beethoven, scored around a 1300 SAT score, while his peers who listened to music forged on a less classical tradition, like reggaeton or country, scored between 900 and 1000 on the SAT. By cutting funding to arts programs, schools are limiting their students abilities and their opportunities to exceed.

The First Lady has begun a program from the White House that teams professional musicians with music students in order to foster their interests and provide a positive outlet for creativity. This program, which began in June, is planned to continue during Obama's term of office. Although changes have begun in the White House, they're taking hold elsewhere as well.

In Boston, schools are struggling to hold on to their music programs. Despite cuts to music programs, 70% of Boston students are still enrolled in some variety of a music program. For students in other states, there are a number of programs outside the classroom you could try.

X8 Drums is proud of the relationships we have developed with school districts and music teachers across the country. We have worked with state boards of education, school principals and private drum instructors to develop complete drum circle packages for a variety of classroom environments. Find out more about integrating drum circles at your school.