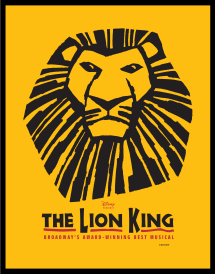 After the monumental success of 1994’s The Lion King, Disney looked to Broadway to keep the magic alive. The producers turned to director Julie Taymor whose vision for the musical took the majesty of the movie and then exploded it out into a stunning experience that engulfs the entire theatre.

The story of The Lion King takes place on the African savannah and the original creative team for the film did extensive research into the area and included many cultural and natural elements into the film. For the musical, the producers wanted the African influence to leap out into the audience; and to do so, they took care to develop every detail of the production, from astonishing costumes and masks to the set designs.

The music was no exception. The orchestrators expanded on the wonderful score from the movie and created and even greater presentation for the theatre audiences. Taymor has stated that it was the music that became a key inspiration for the design of the overall production. To help the creative team bring the music to life, they employed a wide range of percussion instruments. Some of these instruments are traditional African drums while others reflect modern African music. All of these combine to generate a unique sound.

Among The Lion King’s multitude of percussion, the beat of the Djembe can be heard. The Djembe drum is a goblet shaped drum with a versatile sound that ranges from a high pitched slap to a base sound. The Djembe has been a principle item in music in West African cultures and today it is making its way into African pop music.

Related to the Djembe is the Djun Djun Drum. It is often paired with the Djembe to providing the role of the base drum. The Djun Djun is a large two head drum that produces a deep resonating bass sound.

Another contributor to the splendor of The Lion King is Talking Drum. Its hourglass shape allows the player to squeeze the tensions ropes to easily change the pitch. Like many of the African languages, a slight change in pitch creates different means for those receiving the message. Because of this capability, the Talking Drum became a powerful tool for signaling and communicating.

To further develop the color of sound in the musical, the orchestrators used the Udu. Nigerian tradition holds that the sounds from Udu clay pots are the voices of their ancestors.

Congas and Bongos might conjure up images of Latin America, but variations of these hand drums are used throughout Africa and are now becoming regular participants in the American pop music scene.

In addition to the variety of hand drums, The Lion King employs an assortment of auxiliary percussion to help set the atmosphere of the story. These included the casaba, claves, tambourine, rattles, and washboards. And for those who need more cowbell in their lives, they even have that too!

Besides the intoxicating beat of drums, the wondrous sounds of the Mbira (sometimes called the Kalimba) can also be heard. The Mbira is a set of narrow metal strips attached to a sound-board which produces a sound similar to a music box.

In the hands of the artists of The Lion King, these percussion instruments unite to create an unforgettable journey through the life of Simba, the one destined to be king of Pride Rock. The use of authentic African instruments opens the audience to the character’s world while the more familiar instruments keeps them grounded as they watch the dazzling story unfold.