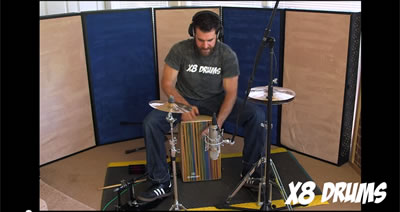 You can call it a wail or a scream, but, Robert Plant’s unmistakable cry at the beginning of “Immigrant Song” will remain a defining moment in Rock N’ Roll until the end of time. It is one of those moments in music that is not only an unforgettable experience, but, inspiration for millions of musicians, guitarists, drummers and vocalists around the world. When Led Zeppelin forged their path through rock music, undoubtedly, they knew the fans would follow. You cannot just create such an incendiary sound without inspiring others to grab their instruments and be a part of the vibe. And so, as Led Zeppelin and “Immigrant Song” are forever embedded into our musical landscape, so is the desire of the musician to find his or her own voice through the art of imitation.

That’s where our staff drummer, Noah Mosgofian, comes in. Noah has been working with us for two years as an online drumming instructor, as we have not been the same since he joined our ranks. As each and every drummer brings his or her own experience, technique and taste to the table, we have been astounded at the enrichment Noah as given us in the lessons he provides to others, and in his presence here at X8 drums. Noah rocks.

Perhaps the “Noah influence” can best be described in his latest video where he translates the drumming from “Immigrant Song” into a spectacular groove on a De Gregorio DrumBox Cajon. With a brilliant flair and unmistakable talent, Noah has reached into the depths of his soul, to reproduce one of the greatest songs in Led Zeppelin history. Would John Bonham be impressed? We think so; we sure are… but you can decide for yourself.

For anyone who tries to translate, cover or replicate a favorite song, there is pressure to keep the song true to the original, yet, bring a little bit of yourself into the mix. It takes talent, work and furious studying of the song in order to accomplish such a great work of art. “Immigrant Song” may not be a beginner’s first choice (in fact, that may just be Noah’s too-smart drummer brain ignoring logical thought), but, when a song is such an important part of your own musical journey, there is not a better feeling that being able to bring yourself into that song.

Thanks for sharing your “Immigrant Song,” Noah! We’re building you a playlist…

Or, he has his own website here: Noah Mosgofian